With FrontFace‘s latest release 4.1, the merger of our previous products “FrontFace for Public Displays” (Digital Signage Software) and “FrontFace for Touch Kiosks” (Kiosk Software) has now been completed into a unified product. 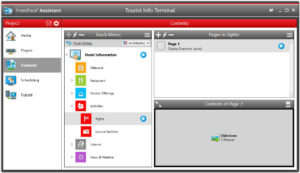 Even mixed forms from both applications are also possible with FrontFace: For example, you can implement an interactive touch screen menu and install a traditional, sequential playlist with multimedia content as a “screen saver” that plays when there is no interaction at the terminal.

Thanks to the new layout technology introduced with FrontFace 4, you can now freely design your interactive menu interfaces and use layouts for both playlists and touch menus.

Existing customers of FrontFace for Public Displays or FrontFace for Touch Kiosks can upgrade for free to the new FrontFace 4, if they are eligible for updates & support.

For prospects, there is a free, fully functional trial version available as well as quick-start tutorials, including one for the new, interactive functions!